We are closing in on a new Crossy road update for iPhone and Android players. It has been a while since the CNY update of course, with players now eager to find out when they can unlock TheDress in Crossy Road on Android and iPhone.

The Dress is of course a reference to the recent viral craze involving the picture of the dress that was shared on Twitter – which supposedly looked black and blue to some, white and gold to others.

Now the developers of Crossy Road have incorporated this social trend into the game and TheDress is actually already available if you play the Amazon version of the game.

The big problem is that The Dress for Android and iPhone versions of Crossy Road is still not available and we’re assuming that it is being prepared in the next update. 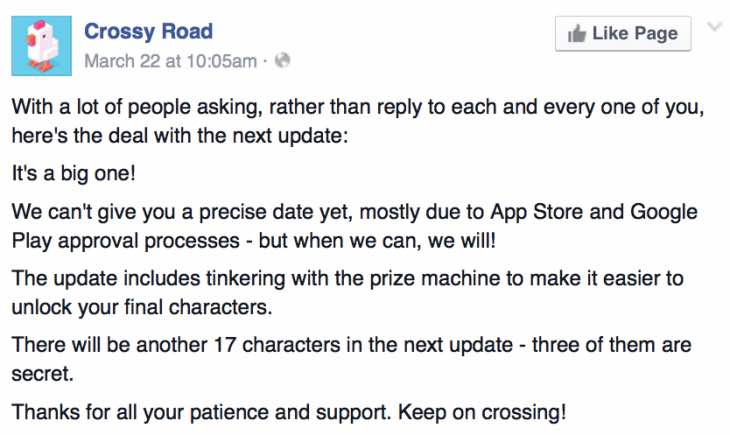 Above is a screenshot from the official Crossy Road Facebook page, confirming that the next Crossy Road update will be a huge one.

Not only will TheDress and Llama characters arrive, but 15 other characters are coming too – including three new secret characters to unlock in Crossy Road as well.

The further good news is that the developers are also making tweaks to the prize machine, so that it will make it easier to unlock your final characters in the game.

Overall, we would say that you just need to hold on a little longer to see TheDress and more in Crossy Road. The next update is going to be a big one and we’ll let you know as soon as it’s available.