There is another treat in store for Advanced Warfare players on Xbox. Sledgehammer has just announced that they will be be bringing some brand new AW weapon variants to the game next week, starting with special versions of the SAC3 and the Royalty Elite Variants.

We can tell you that this is going to be the non-akimbo variants of the SAC3 and there’s going to be six of them in total. Each has their own unique design and will allow the player to ADS for precision targeting.

You can see the image of the SAC3 Non-Akimbo variants here as SH Games have given players a preview. 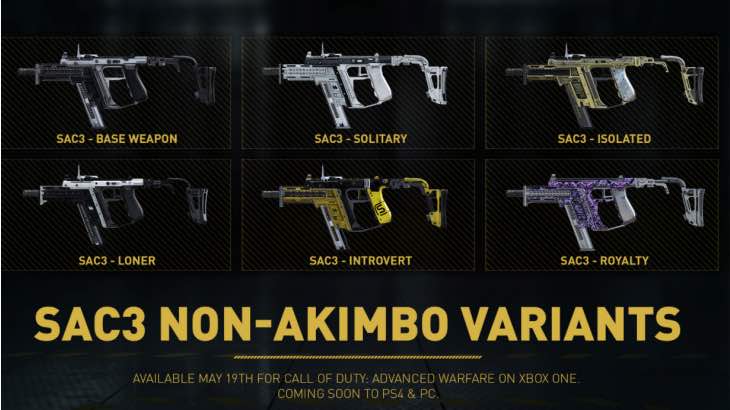 Also coming is the lovely looking Royalty Elite variants in COD AW too. These purple-skinned weapons look like Grand Master Prestige models and SH says that they will have stats similar to current Elite weapons in the game.

Some of the variants will include the BAL-27, ASM1, TAC-19, MORS and the AK12. Again, we’ve got a great image for you below showing off the new variants up close and personal.

What do you think about these? They look awesome in our opinion and we can’t wait to get to grips with them in battle. Which is your favorite?