We have a heads-up of those that are still currently loving the Black Ops 3 beta and trying to level up to test out the best specialists in Black Ops 3.

Treyarch has announced once again that they will be raising the level cap in the game from 40 to 49. This means that you’ll be able to try out another new set of unlocks in the game and now also for a longer period.

The developer keeps on giving and now we are pleased to say that the beta will last longer than originally planned. The Black Ops 3 servers were scheduled to go offline at 12am Pacific on Sunday, but now the new Black Ops 3 PS4 beta end time for US and UK is 10pm on Monday Pacific Time.

For those in the UK it means that you can keep playing and ranking up until 6am on Tuesday. Unfortunately we can remind you that the Black Ops 3 beta stats won’t carry over to the full game – everyone will start over fresh. 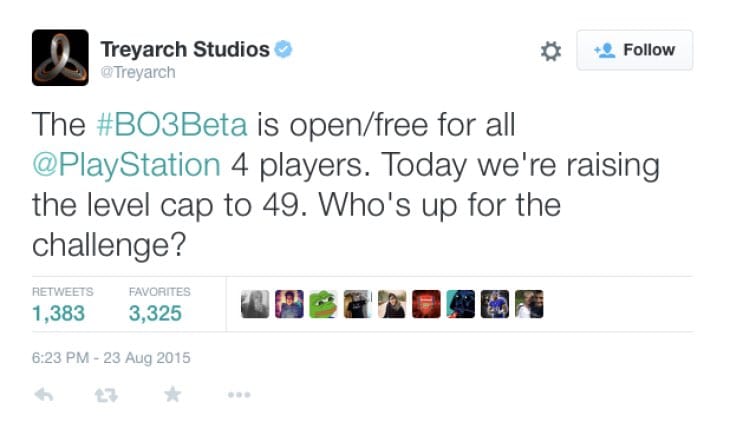 Then again, the experience on the four maps will be invaluable and you’ll get a good head start against brand new players since you already know all of the hotspots and which weapons are best in the game.

Finally, you may want to know that all PS4 users can play the beta now for the last day – not just those who pre-ordered. Treyarch has really been generous here and we are expecting the same treatment for when the Xbox One beta begins soon.

What has your experiences from the beta been like so far – are you loving the game? What improvements would you like to see?