We still have more than a year before the new Audi R8 hits the market, but we have already seen an image or two of the upcoming supercar. We have already seen the new R8 in winter testing, it’s finally nice to see it hit the NÃ¼rburgring and being put through its paces.

You will notice from the images above and below, more of which can be found on Autoblog that it has taken a few design elements from the 2015 Audi TT, although they have been taken to a different level.

The overall shape hasn’t changed much from the current model, but we can make out that it will be more angular, which is just what Audi has done with the next-gen TT. 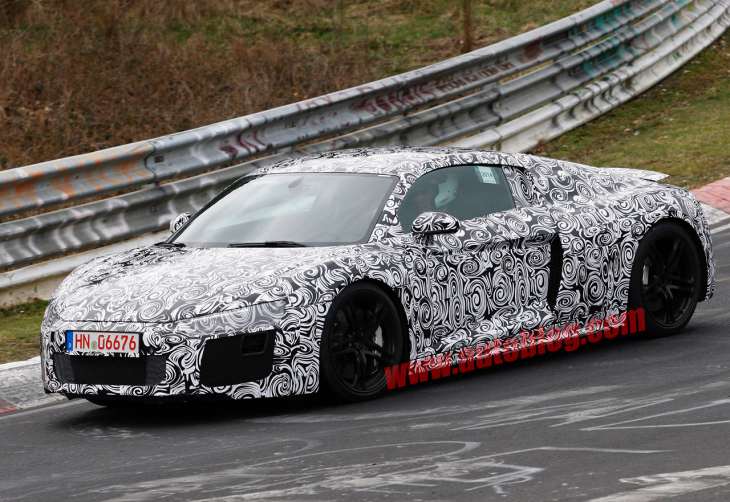 With the new Audi R8 borrowing from the 2015 TT exterior, it makes sense that this could also be the case for its interior as well. The Audi TT still sticks with the minimalist approach when it comes to its interior, even though it will sport the all-new reconfigurable gauge cluster, something the R8 is longing for.

Not much else can be seen in the images, but Audi has already hinted that the next R8 will be around 100 — 200 pounds lighter, which will help improve power-to-weight ratio and handling.

Most of this weight saving is thanks to its platform, which will be a combination of carbon fiber and aluminum, much like the Lamborghini HuracÃ¡n in that respect.

We’d like to say that we know what engine choices the new Audi R8 will offer, but all we have to offer is mere speculation. There is a rumor that the new RS7 twin-turbocharged V8 engine could help power the new R8, although other rumors would have you believe that Audi could stick with the proven naturally aspirated 4.2-liter V8 engine.

As for the V10 version, we still expect to see this, which as you know will carry a premium.

Expect to see the new R8 unveiled at the 2015 Geneva Motor Show.