Whenever you think Audi, the first thing that comes into your head is the A4 Quattro, so it comes as no surprise that the German automaker would want to use the four-wheel drive system in their A1 supermini. They have used the system in the A3 and the TT, so this is an inevitable step.

Which has learned from Audi that the idea will go from concept to production, even though it was first rumored not to be coming to the small car. However, we are uncertain when the vehicle will be released and what price it will cost. We have to wonder if it will be much longer after the standard version of the Audi A1, which will be in August in Europe and later in 2011 throughout the rest of the world? Automobile Mag reports that the price will start from â‚¬15,800 ($19,900) in Germany, so you can be certain that the Quattro will come with a higher premium. 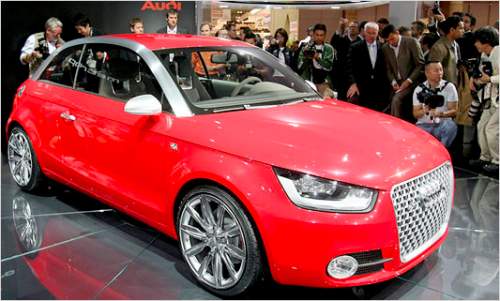 Auto 123 was at a recent Audi “Fascination of Quattro” event. They were shocked to learn that not only was the four-wheel drive A1 attending, but they would also get the chance to test drive one. To truly test how well the car performs, they had to drive in what could only be described as a “winter rally stage,” well that was how the reviewer put it.

We do not have any details as to what engine will be used, but you can be sure that it will be more powerful and refined than those used in the standard A1. There are no plans of a U.S. release, but as drivers in North America start their love affair with small vehicles — Ford Fiesta and the upcoming Focus a fine example — you can be sure that they will want to get their hands on it.

Would you like to see the Audi A1 Quattro in North America?