The Motorola ATRIX 4G has not even been out for three months, however we are now hearing rumors suggesting that a follow-up smartphone could be on its way, whether this will be called the Motorola ATRIX 2 or just a slight variant on the current model is unknown, in fact there is a lot that we don’t know, but a recent BGR article has told us a few things which excite us.

Let’s start by saying that this article depends heavily on the accuracy of BGR, however if it turns out to be spot on we can expect the new ATRIX to feature an 8 megapixel camera capable of 1080p HD video capture – this is quite an upgrade when we consider that the ATRIX 4G is only capable 720p video capture via its 5 megapixel sensor. At one time we were under the impression that a software update would be released to unlock 1080p 30fps capture, however we are beginning to think that this will never arrive.

We must admit that when the Motrola ATRIX 4G first arrived we thought its camera / camcorder functionality was a little lack-luster, let’s face it beneath the smartphone’s shiny exterior is a Tegra 2 dual-core 1 GHz processor and 1GB of RAM, therefore in terms of performance hardware it was by no means lacking, that’s why an 8 megapixel camera upgrade would undoubtedly unlock this handset’s true potential, we just wonder if Motorola will upgrade anything else.

If you check out the photo below of the rumored device you will see that it clearly shows a device which looks a lot like the Motorola ATRIX 4G, however those of you who have had plenty of hands-on time will notice that the 3.5mm jack socket has been relocated slightly, not only this but there’s said to be a dedicated camera button, a slightly refined physical design and on the rear you can clearly see a sticker stating that there is an 8 megapixel sensor with 1080p capture. 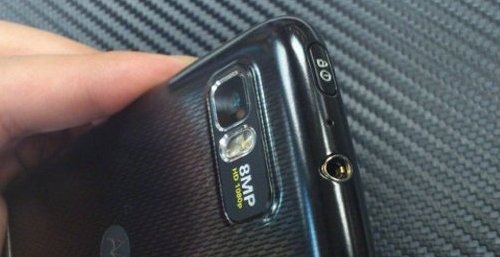 After having a quick look at tech specs it is clear that the ATRIX 4G is not really lacking in any area excluding its camera, perhaps the next model will have slightly cranked up clock speed and a higher capacity battery, but everthing else is up-there with today’s top-end offerings in our opinion. Do you agree? Or is there something you would change? Let us know in the comments section below.