Asus have only just released the Transformer Prime in the US, and as we reported earlier today the company has come under fire from disgruntled owners because of a locked bootloader. Now we have news of a possible smaller Eee Pad that could be set for a CES 2012 showcase.

While rival company Samsung has released a variety of different screen sizes for is tablet PCs, Asus has stuck to the 10-inch form factor. But this could be about to change as an article on the Android Community is suggesting a 7-inch model is on its way.

The rumor was first reported by Notebook Italia who also have an image that you can see below, and it is thought the device will make its first appearance next week in Las Vegas. In the image you can see the same homescreen button configuration that can be found on the Transformer range.

It is not thought the smaller Eee Pad will feature the attachable keyboard though, and it seems like the device is currently running Android Honeycomb. Whether it will feature Android 4.0 once it is released remains to be seen.

Obviously this is only an image that could easily have been made up somewhere via some software such as Photoshop. But considering the recent release of the cheaper Kindle Fire it would make perfect sense for Asus to offer a cheaper tablet PC to consumers. If Asus could get a better specified product out to consumers for not much more money than the Kindle Fire they would probably be onto a winner.

There has even been rumors recently that Apple themselves were considering launching a cheaper iPad, which could be a refreshed iPad 2. Will you consider a 7-inch tablet PC from Asus? 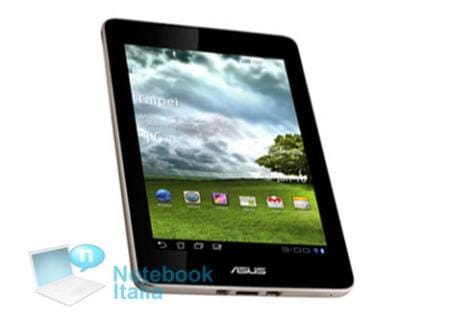