For all of those of you who are planning to pick up the Apple iPad on April 3rd, we have an interesting article for you to check out, which shows that pre-order demand for the iPad is considerably higher than it was for the iPhone.

As reported from Investor Place, the new surveys come to us courtesy of ChangeWave, who have been tracking movement for the upcoming iPad, and have compared it using similar surveys placed on the iPhone, way back in 2007.

From this we can see that demand for the iPad is already greater than it was for the iPhone. With pre-orders set to start on March 12th, these figures are expected to rise considerably. 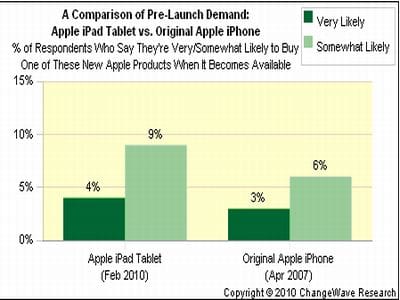