A new Advanced Warfare update is on the way soon, as Michael Condrey from Sledgehammer Games has been talking about it on Twitter. More importantly, this update is going to specifically target even more weapon balance changes which should make a lot of you happier.

We can tell you that there are 15 weapons in the game that are going to be in for change, according to Condrey. The co-founder of Sledgehammer has already revealed that the SN6 SMG will be buffed as one of the changes.

The MP11 may be due for a change too, but Condrey wasn’t as revealing when answering a fan on Twitter. We do know that the update is coming soon though, so hopefully that implies that it could be thrown into the next update. 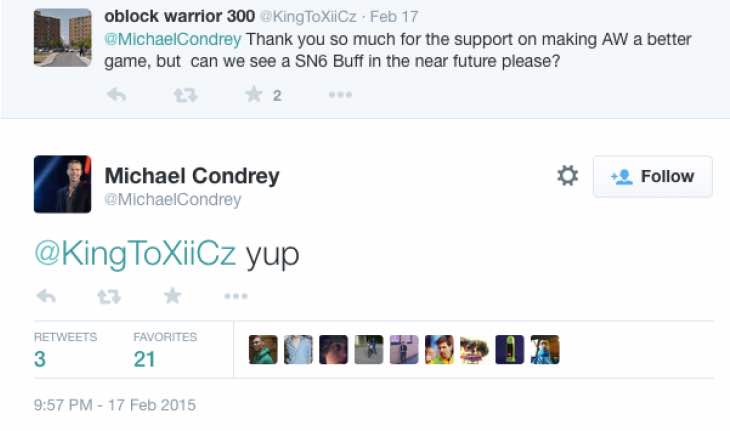 15 Weapon balance fixes are a pretty big deal, so hats off to Sledgehammer for taking the time and effort to continually tweak multiplayer weapons based on community feedback.

Let us know what other weapons you want to see tweaked, aside from the SN6 buff. Which weapon would you say desperately needs a fix above any other weapon in multiplayer at the moment?