It looks like another new weapon could be on the way to Advanced Warfare players soon. Co-founder of Sledgehammer Games Michael Condrey is currently in the process of asking players which weapon they want to be added to the game with an incoming poll.

Not only that, but a separate weapon altogether appears to be coming at some point as well. The developers are teasing it right now, as you can see from the image below – appearing to show some kind of vintage pistol.

Some gamers are saying that this is going to be a shotgun, but it looks much more like a revolver in our opinion – we’ll just have to wait and see what develops this week.

Meanwhile, a separate Tweet reveals that a poll is coming to determine a ‘throwback’ weapon that could be coming back to Advanced Warfare. 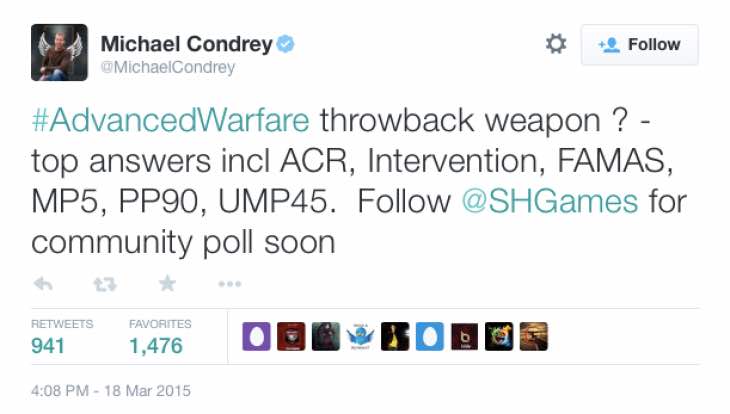 Some of the choices by popular demand include the ACR and the Intervention in Advanced Warfare, so it would be pretty exciting if either make their way into the game.

It’s also worth raising the question on whether SH Games is wondering about what to put into the game as the AW DLC 3 weapon after the OHM.

After all, why the sudden questions on new weapons? Let us know what you think about this, i.e what you think the weapon is in the image above and also your thoughts on the ACR and Intervention possibly coming to Advanced Warfare in a new update.