A lot of people are expecting the next iPhone to come with a quad-core processor as a minimum requirement. One area that is still up for debate though is display screen size. Should Apple stick with their winning 3.5-inch formula or experiment with a new display screen size closer to the 4-inch standard that we see today?

As you can imagine, there is divided opinion over this. Obviously the current crop of Android handsets all surpass the 4-inch range and many Apple fans would love to see an iPhone which offers a much bigger display to suit their multimedia viewing needs.

On the other hand, Apple has stayed true to a 3.5-inch diagonal display screen on every single iPhone released, including the original, so perhaps their priority is not about the size of the display screen, but improved performance and usability instead. That hasn’t stopped the 4-inch iPhone rumors though from coming out on an almost daily basis.

This week we have heard the latest whispers from 9to5Mac that Apple’s next generation iPhone will be a 3.99-inch effort, with a new resolution of 1136×640 pixels. What’s interesting is that the width of the iPhone is set to stay at 1.9632 inches, meaning there’s still no edge to edge display. However, we may be seeing a display which increases the height of the display to 3.484 inches tall. The new resolution is also thought to be very close to a 16:9 screen ratio, which may be excellent news for those of you who enjoy watching media in this format.

A picture showing a mock up of the new iPhone’s display has been provided below, courtesy of Niilo Autio. As you can see it looks noticeably different to the iPhone 4S, but still pretty sexy in our opinion. It’s not the 4.xx-inch display or edge to edge screen that you may have wanted, but it’s still a bigger screen and it looks rather nice.

Would you have any objections if the next iPhone looked like this? Watching full screen 16:9 movies on the iPhone is a great prospect to look forward to, so let’s hope that Apple is planning to reveal more details at WWDC 2012. 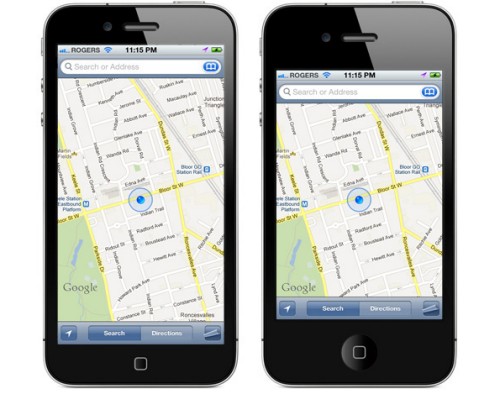