While iOS 8 is expected to be the main focus of WWDC 2014 in just a few hours time, consumers are more excited about Apple’s plans later on in the year with regards to the iPad Air 2 and iPhone 6.

We know that Apple are already planning on introducing a larger iPad in the region of 13-inches with the rumored iPad Pro, but what we haven’t discussed yet is the idea of Apple venturing into the realm of solar-powered charging.

Imagine if we reach a stage where Apple are able to sell a new iPad Air 2 which could come with the ability to charge in direct sunlight. Consumers are not shy to say that battery life has been the biggest problem of iOS devices within the last few years.

Having a solar powered iPad though could be a massive game changer for Apple and this week we bring you a reminder that it could be a reality rather than a dream. Around two weeks ago, Apple successfully filed a patent labelled “Integrated touch sensor and solar assembly.” 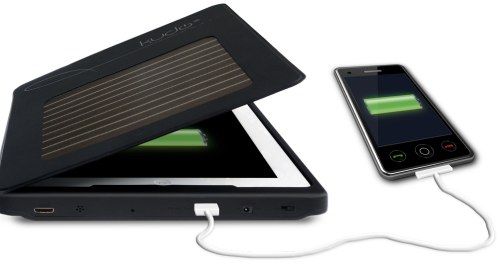 Full details on what the patent entails, as well as diagrams of the patent in question can be seen here. With Apple already successfully securing the patent, the only question that needs to be asked is when the new technology will be ready for public release.

Solar iPads seem to be the first line that Apple will target, but if it is a success then obviously it could also reach future iPhone devices – perhaps too late to feature on the iPhone 6 though.

Another piece of information that we can share is that there are already solar-power over cases for the iPad Air that consumers can buy right now. Kudocase are selling some fantastic solar charging products that are already Apple approved.

Is solar power charging the future that Apple are working towards as the next big thing? Let us know your thoughts on this and whether you would be interested in buying into this tech if and when it becomes available on the next iPad.