If you are a fan of Apple products, you’ll know that it is sometimes very frustrating when you have parted with your cash for one of their premium products, only for Apple to update it once again a few months later with brand new hardware.

This could be the same case for their Macbook Pro line, as despite the company giving their Pro laptops a refresh in February of this year, fresh intel has suggested that another hardware refresh could be on the way before the end of the year.

Clues about the new Macbook Pro models have even been found on Apple’s US store, as discovered by 9to5Mac. Listings for two new models with the descriptions ‘Macbook Pro Memory Model’ are clearly visible, and if you hover over both links, you’ll see URL’s attached with both listings as well. The URLs list numbers revealing 2.33 and 2.4, which could be a sign that Apple may be announcing two new Macbook Pro models with a Core i7 processor and speeds of 2.33Ghz and 2.4Ghz respectively. 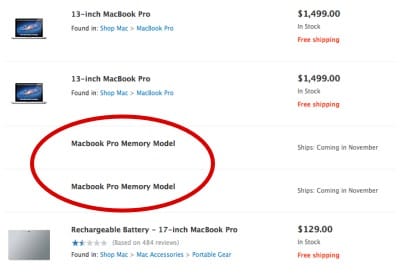 The listings also reveal a planned release date sometime in November and given the fact that this has come directly from Apple’s own store, we are definitely inclined to believe that this is genuine information here and not standard rumors.

One thing that is for sure though, is that these models are not going be cheap if Apple do announce them. Their most expensive Macbook Pro to buy at the moment costs $2,499 for a 17-inch model with standard configuration. That model has a Core i7 processor with a 2.2Ghz speed, so we may be seeing an even higher price for the new models with faster 2.33Ghz and 2.4Ghz speeds.

If Apple are going to ship these models in November, would you be interested in picking one up, or are you happy with your current Mac at the moment? Pricing is going to be a big factor as well of course, so we’ll have to wait until we hear more rumors on the new Pro lineup.