The moment many Destiny players have been waiting to see, appears to arrived. We recently told you about the struggle on how to get the Crux of Crota in Destiny – now though, it looks like one player in Germany has it and has wasted no time in upgrading the Eidolon Ally to the Necrochasm.

The Crux of Crota is the final ingredient in this upgrade and for a week players have been pulling their hair out, with many saying that there was a problem with the Crota’s End loot table on hard mode not giving out the Crux of Crota.

Bungie maintained that it was still possible to get it and now we’re pleased to say that we have the first legit evidence of this – not a photoshopped image showing a green pair of Crocs. 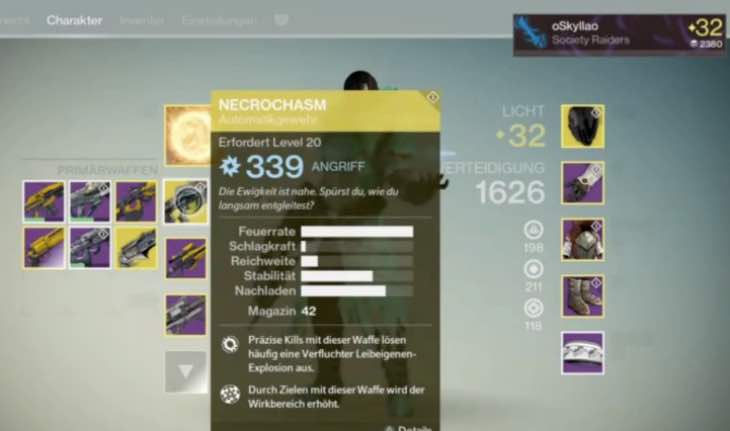 The image above has been captured from German player oSkyllao, which clearly shows the Necrochasm in his inventory. For those that may call it a faked image though, we can go one better and bring you the first Necrochasm Auto rifle gameplay in Destiny as well.

The gameplay shows footage from the same player above, using the Necrochasm in-game and we finally get to see what it looks like in the flesh.

The design is amazing, although some of you may be unimpressed with what you see. Something tells us though that this gameplay doesn’t show the full potential of the Necrochasm.

Bungie has made the Crux of Crota an extremely rare drop to get and if you do get it, the Necrochasm is surely going to be a prize that is worth the grind.

Enjoy the ‘world’s first’ footage of the Necrochasm below and give us your reaction to it.