We have been told over and over to be patience and now Sony has delivered by nearly bringing all the US PSN back up online. You can watch a video below this article, which shows Kazuo Hirai announcing the PlayStation Network restoration at last. Something PS3 users have been wishing for over the last few weeks, only to be offered encouragement to stick by Sony.

It’s been reported that thousands of PS3 gamers have moved to the Xbox 360 by trading in their games and system, was this you or are you smiling to be back on the PSN today?

The image you see below was taken a few moments ago and shows nearly all of the United States are green, which means back up in most cases. Sony does warn that if your state is green but not on the PSN, then this is because the servers take a while to fully populate. Let us know in the comments if you’re back up, and what state or area of the world. 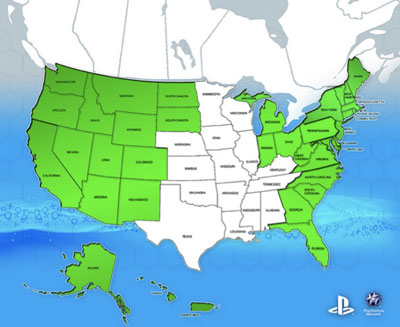 At the time of writing we can confirm the UK is not back on the PSN, let us know if you are.

Update: The United States now all green, so the US should now be able to change passwords. UK PSN still not online.