We know that 2K have been having some serious issues with NBA 2K17 servers on December 11. However, 24 hours later we can see that the problems are continuing for a lot of players with many complaining about getting the NBA 2K17 error code EFEAB30C and asking how to fix it.

The good news is that 2K has already issued an official response about the problems and for those that want to know how to fix NBA 2K17 error code EFEAB30C or 4B538E50 here is the official fix from 2K. 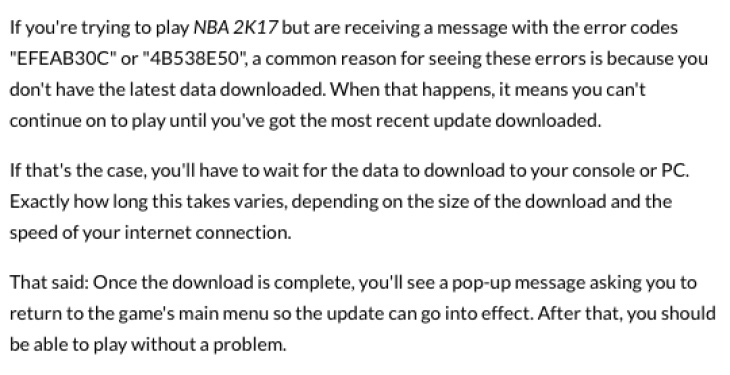 As you can see, 2K state that the problems are due to you not having the latest data download for the game and part of the issue may be that the download isn’t available automatically.

To help combat this situation, you can manually force the download by playing a few games in Play Now mode which will hopefully stop you getting these errors.

We know that the NBA 2K17 servers are still down for a lot of players on Monday December 12 so help us by giving your status below if you are having problems.

Can you play right now or not?