Back in October we brought you a review roundup for the popular 2K Sports basketball title “NBA 2K11,” which everyone seemed rather impressed with. However, there have been issues within the game since then, but hopefully these will be sorted with the recently released patch.

According to pastapadre at pastapadre.com, 2K Sports has recently revealed the full list of details for the “NBA 2K11” patch, which was reportedly made available for the PS3 and Xbox 360 yesterday. However, there is no word on when a PC patch will be arriving, but we’ll keep you updated.

The patch fixes problems such as the freezing issue within My Player mode, the hang on startup — which would happen if the player had a large amount of saved files on the hard drive — and an issue where the Potential values were not updating properly within the player progression system. 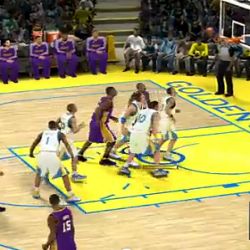 A few minor audio problems have been addressed, the Shot Stick shot release timing has been improved, players will now be able to execute the Crossover move when using the controller’s ‘Alternate A’ configuration and the directional passing system has received some improvements.

You can view the full list of details via pastapadre.com. Have you been experiencing any problems while playing the NBA 2K11 game?