If you live in the UK and were waiting for the upcoming release of NASCAR The Game: 2011, then I’m afraid we have some rather disappointing news for you. It has just been announced that Activision will not be releasing the much-awaited racing simulator in the UK.

As Mike Jackson over at computerandvideogames.com (via MCV) recently reported, the game — which was already pushed back from its February 2011 launch date until March — will still be hitting US stores as expected, but UK gamers will unfortunately be missing out.

UK developer Eutechnyx originally delayed its release, in order to give them a little more time to polish the final game. According to an article by Simon Priest over at strategyinformer.com, the UK release has been cancelled because there wasn’t enough interest in the NASCAR racing style. 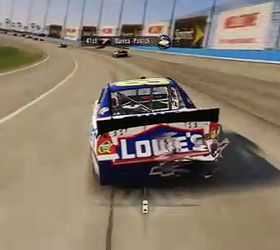 However, the PlayStation 3 version of the game — which features 36 events, custom car / driver options and an extensive career mode — will be region-free, so PS3 owners shouldn’t have any problem importing and playing it. NASCAR The Game: 2011 will be available in the US on March 29th.