We have some potentially great news for Zelda fans now as it has been rumored over the weekend that Nintendo has two unannounced Zelda games on the way for their 3DS handheld. We have an image to show you now which appears to back up these claims, but it could also be the result of a well made photoshop.

Some fans may still be getting their teeth stuck into the excellent Ocarina of Time 3D on Nintendo’s glasses-free 3D handheld, but an image which we have to show you suggests that the company will be following up with not one but two titles.

The image in question shows logo art for two games going by the titles of ‘The Legend of Zelda: Fire Prophecy’ and ‘The Legend of Zelda: Ice Prophecy’, translated from Japanese. Before we go any further though, it is worth pointing out that the origin of the picture came from 4Chan, so we’ll let you know make up your own minds on that in terms of validity.

We will say though that both images look highly professional, so we’ll have to take our hats off to the creator if these images prove to be fake – well done sir. On a more interesting note, it isn’t the first time though that Nintendo has launched simultaneous Zelda titles on a single platform. The famed Gameboy Color was once the recipient of LoZ: Oracle of Seasons and Oracle of Ages way back in 2001. Those two games received great reviews we may add and if its true that Nintendo are planning simultaneous 3DS releases for these two mystery Zelda titles, then fans are obviously in for a huge treat.

Hopefully we’ll hear more on these rumors as we don’t really want to go on too further in case we’ve been the victim of another photoshop mastermind. Look at the image for yourself, courtesy of ScrewAttack and let us know how authentic you think it is. Fire and Ice ‘Prophecy’ certainly sounds awesome though – fingers crossed guys. 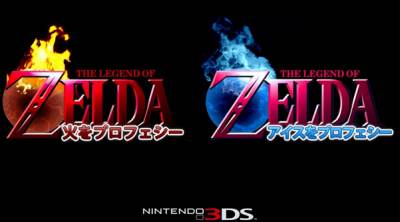