We have some great news now for those of you waiting to hear news about the upcoming MX vs. ATV Alive game for the PlayStation 3 and Xbox 360. Not only has the off-road racer received an announcement trailer and a few screenshots, but it’s also been given a release date window.

According to a recent article by Eric Blattberg over at psu.com, the MX vs. ATV Alive game — which is the fourth installment in the MX vs. ATV series (with MX vs. ATV Reflex being the previous installment) — will be arriving sometime in May of this year and will come with a price tag of $40. 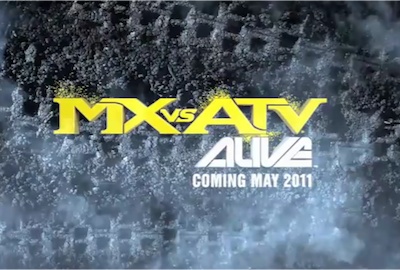 THQ recently revealed that the MX vs. ATV Alive game will have better physics compared to the previous title, and will be supported by “unprecedented digital content distribution strategy,” which in so many words means that we will be seeing a lot of DLC arriving after the game is launched.

Michael Lustenberger — the publisher’s Vice President of Global Brand Management Digital/Online — unveiled a few details about the upcoming game recently, including the new Bar-to-Bar gameplay mechanic, which enables gamers to bang handlebars and go elbow-to elbow in order to take the lead.

You can view the recently-released announcement trailer and screenshots through a recent nextgn.com article by Yogev. Are you a fan of off-road racing games? If so, does the MX vs. ATV Alive game appeal to you at all?