As some of you may know Sonim are responsible for producing the most ruggedly built phones, which they claim are virtually indestructible. You may recall last year at the CES one such phone being the center of a rather embarrassing talking point, when their so called ‘unbreakable’ phone was indeed broken. Well they have developed yet another to be put to the test, the Sonim XP3300 Force.

Although this device looks like its predecessors, it has a claim that it sets it apart from the all other devices. Sonim say this phone offers the longest talk time of any existing mobiles in the world right now ranging up to 24 hours from 20. They also claim you can have up to 800 hours of standby or up to 24 hours of GPS tracking constantly.

As for its toughness, the Force is designed to withstand some of the most extreme circumstances you could ever think of being in when using your mobile device. The main situations its able to withstand are submersion in up to two meters of contaminated water, a two meter drop onto solid concrete and extreme temperatures that range from -20 up to 55 degrees Celsius. This is all possible thanks to its 1.5mm Gorilla Glass covering the display and its impact and water resistant out casing. 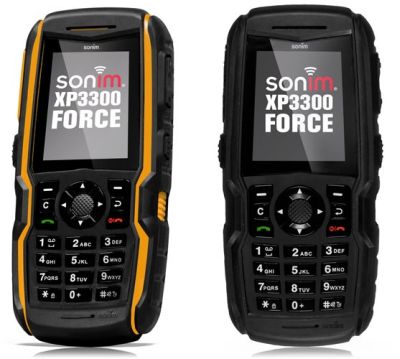 The Sonim XP3300 Force appeared at the MWC in Barcelona yesterday. Engadget who were there managed get their hands on one to see how it performed when they put its name to the test. You can see how it did in the video which can be found at Engadget here.

What do you think of the Sonim XP3300 Force? Share your thoughts with us.