Last week we told you all about a video clip where someone managed to get Modern Warfare 3’s M.O.A.B killstreak reward in just 62 seconds, well now we have another video to show you which obliterates this time, however we are not impressed as the spawn trapping techniques used which pretty much sums up exactly why many opted for BF3 over MW3 this year.

We have embedded a video at the bottom of this post which has been viewed over 130,000 times and has many dislikes, this is because the tactics used are extremely ‘cheap’, despite being executed perfectly. Basically whilst playing Domination on the Mission map an entire team traps their enemy’s at the ‘A’ zone, here one player literally sits behind a fence and constantly picks off enemys as they spawn, this allows him to set some unconfirmed World records such as most M.O.A.B killstreak rewards for a single player (3), most kills in a round for one player (144), most M.O.A.B killstreak rewards for a team (7) and fastest M.O.A.B ever (roughly 48 seconds).

The post game stats shown below highlight just how effective and rediculous spawn trapping can be in MW3 – what annoys us the most is the fact that the uploader seems proud of the video! As you can see one of the enemies gets 0 kills and 77 deaths no-matter how bad a player is, this should not be possible. 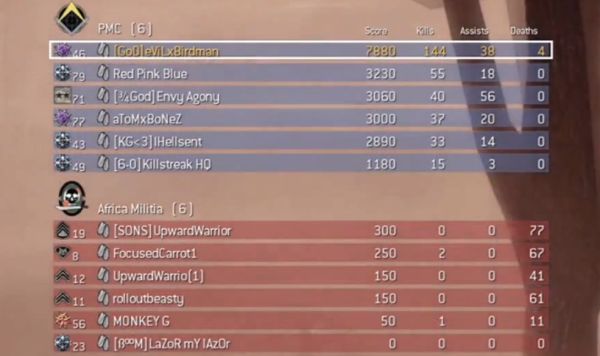 This is a great example of how CoD multiplayer can suck at times, obviously this is perhaps the most dramatic example of such tactics being used, but it just goes to show that some aspects of the game really need to be looked at – it remind us of the 511-9 video which resulted in a Black Ops player getting a ban back in March, surely Infinity Ward can do something to resolve such spawn trapping tactics…

So what solutions are there? Well first of all it is only really the Domination game mode which allows such an exploit as it is easy to capture two zones and then leave one zone for the enemy to keep as they will constantly spawn near it. Perhaps the game could detect when spawn trapping is taking place (based on kill times and zones held) and then start spawning people in more random areas on the map, this would have a huge effect on the spawn trap as camping spawn trappers could be taken out easily, or perhaps a different zone could be captured which would also change the pattern of the game.

We would love to hear your opinion on the video embedded below, watch it, get annoyed and then share your opinionated views on the matter in the comments section.

Should Infinity Ward be doing more to stop such tactics being used? Should this gamer be banned? Let us know what you think….