The majority of MW3 players are probably aware that a remake of Terminal is on the way to the game, but you may be confused as to whether the map will be arriving on all platforms at the same time, or if it will be subject to the same exclusivity shenanigans as usual.

Well, we have some additional information on this for you now and it is mixed news depending on which platform you are playing on. Terminal is on the way soon, but a few Tweets by Infinity Ward head Mark Rubin has confirmed that the map will be releasing on Elite first, and PS3 players will again have to wait a month to play it after Xbox 360.

Rubin specifically responded to a user question asking whether PS3 had to wait again for the map, telling him that although he wasn’t 100% sure, PS3 users will get it 30 days later. Has the excitement now turned to disappointment on PS3 and PC, in finding out that you now have to wait even longer to get your hands on arguably the best map from Modern Warfare 2? 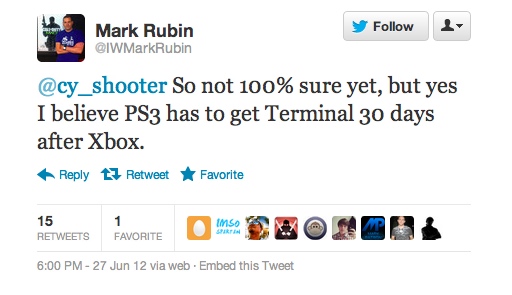 Considering that the wounds are still fresh from the lack of Dawnguard on PS3, we have a feeling that PS3 users will be well used to getting shafted like this. At least Terminal is coming to the game for free though, so at least you won’t have to pay anything for it when it finally does arrive.

So there we have it – expect Terminal to land very soon on Xbox 360 Elite, and then 30 days later for PS3 users. Let us know your thoughts on the wait for Terminal.