Earlier on this week we informed you about the latest pieces of DLC that will be arriving soon for Modern Warfare 3. The rumored Terminal map from MW2 wasn’t on that list, but we’ve now found out that Infinity Ward are definitely planning to bring it to the game soon.

Just to recap, the June content drops for Elite members on Xbox 360 will be three new Face Off maps and one new Spec Ops maps. It means that there won’t be any new standard multiplayer maps this time around, although Infinity Ward are probably going to make up for that when Terminal arrives.

Infinity Ward’s executive producer Mark Rubin has been providing a lot of juicy information on his Twitter account, notably the exciting confirmation that the map will be a free download when it does arrive. You may remember that ex-community manager Robert Bowling was famously quoted as saying that he was working to get some throwback maps in MW3 that would be free to everyone and will be not tied down to any contracts or partnerships. 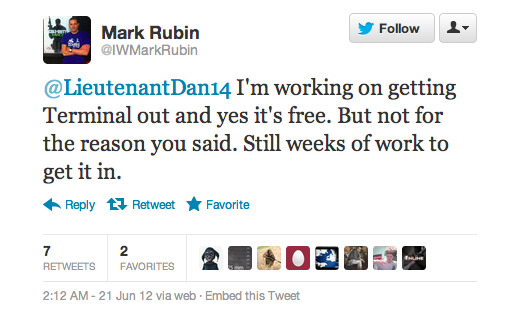 It looks like his vision has now paid off, as Terminal is coming to MW3. There’s no indication on when this might arrive, but Rubin said on his Twitter account that it is something that he is working on right at the moment. After scrolling down Rubin’s Twitter marathon session over the last 24 hours, we also read that Rust and Shipment where also on the old map ‘wishlist’, but he did say that he wasn’t sure if they could put them in.

Considering Activision’s ‘community’ reputation for being greedy, it’s great to see that they will be offering such a massive map for free. Along with HighRise, Terminal is definitely one of the highlights of MW2 and we can’t wait to see this available for everyone. They could have easily said that this is an Elite bonus only, but they resisted that as well – hats off to IW on this one.

Do you have fond memories of Terminal? What old school maps would you like to come next?