Call of Duty: Modern Warfare 3 Hardened Edition will cost $99.99 making it $40 more expensive than the standard edition, for this price you get the game, 1 year’s access to Call of Duty: Elite, a steelbook case, founder status and the limited edition field journal. There is just one difference between the PS3 and Xbox 360 hardened editions, PS3 gamers will get an animated timeline theme, whilst Xbox 360 gamers will get the special ops Juggernaut Xbox Live outfit. 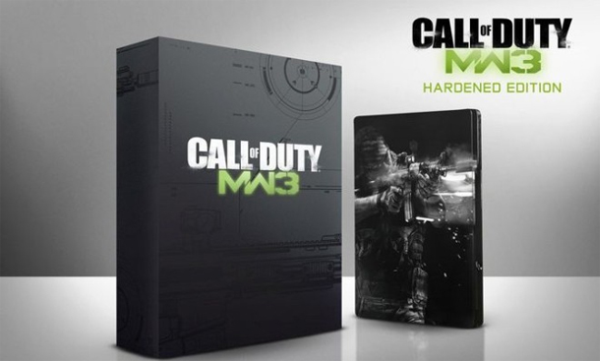 Given the fact that Modern Warfare 3 plus a year’s access to Call of Duty: Elite would set you back $109.99 the pricing seems fair, but not everyone wants Elite access, which then makes it seem like quite a waste of money.

We really think that Call of Duty: Elite will be pushed heavily, therefore we wouldn’t be too surprised if Beachhead Studios and Activision throw in more bonuses to elite members after MW3’s release – for this reason alone the hardened edition may well turn out to be a worthwhile purchase. So far we have been told that Elite subscribers will get over 20 pieces of DLC a year which will consist of Spec Ops missions, new game features and maps – we are sure that this will attract a lot of attention.

You can pre-order yourself of the hardened edition of MW3 for PS3 here and Xbox 360 here, but for now we would like to here your opinion on the pricing, especially given the fact that Black Ops’ hardened edition cost just $79.99.

Does Call of Duty: Elite interest you? Do you think Call of Duty: Modern Warfare 3 Hardened Edition is over-priced? Let us know your thoughts in the comments section.

call of dutyCall of Duty Elite