The tablet market continues to grow with many new devices being announced or released on an almost daily basis recently. Today it’s the turn of the MSI WindPad 110w which is now ready to preorder for June 1 shipping.

According to an article over at netbooknews by Peter Cartwright, the new tablet PC is available from ExcaliberPC and priced at $599. Full specifications according to the listing are that the device will be powered by an AMD dual-core E350 processor.

It runs Windows 7 Home Premium as its operating system. The battery is rated at 4,200mAh so should provide a reasonable amount of use.

The display is a 10.1-inch 1280 x 800 capacitive IPS multi-touch offering. You also get for your money a Radeon HD 6250 graphics card and 32GB SSD. Added to this is 2GB of DDR3 RAM, Bluetooth 3.0, and front and rear cameras. The cameras are 3-megapixels for the rear shooter, and 1-megapixels on the front. There are also a mini HDMI port, USB 2.0 and a SDHC card slot. 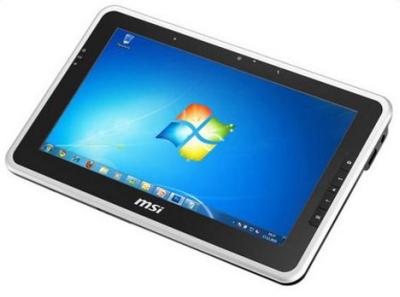 It remains to be seen if the new tablet has what it takes to compete with the numerous other devices becoming available. Do you like the look of the new MSI WindPad?