We have some news of another tablet debut which is set to be early next month at CeBit 2011. MSI are ready to unveil two of their tablet PCs the Android 3.0 Honeycomb based 100A and Windows 7 based WindPad 110W.

According to DigiTimes the event that takes place in Hannover, Germany March 1st -5th will showcase both of Micro-Star International’s devices. While on the outside both will look like the varying other tablets in the market, it is what’s underneath these slates that makes them significant.

The Android WindPad 100A was reported as being in the process of manufacture back in December last year. It features the NVIDIA Tegra 2 processor as seen in the Samsung Galaxy Tab as well as the latest OS from Android, 3.0 Honeycomb. 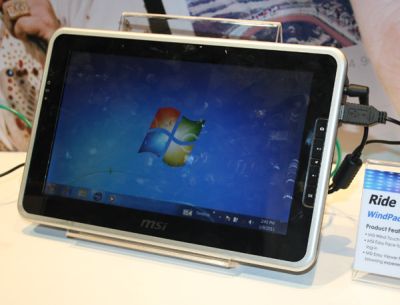 Inside MSI’s 10.1” display WindPad 110W will be an AMD dual-core C-50 APU, a 32GB SSD, Radeon HD 6310 graphics with Brazos processor, Windows 7 Home Premium OS. It will also include Wi-Fi connectivity, ALS light sensor and a G-Sensor. DigiTimes has more details about the device.

Netbooknews also have an article about the WindPad 110W where they say if you don’t mind the low battery-life that this tablet offers then you’d notice a ‘significant leap forward’ as far as the multimedia side of things go.

What do you think of these two tablets? Let us know your thoughts.