Yesterday Mozilla released Firefox 7 for Windows, Mac and Linux (you can download it here) – today we will look at some of the improvements which have been made to the Google Chrome / Internet Explorer / Safari rival to bring it up to speed.

According to Mozilla’s official press release Firefox 7 manages memory much more efficiently than before, this will obviously improve overall performance – but it will be very noticeable for people out there whose computer is lacking in terms of RAM. But that’s not all, we are also told that clicking on menu items, opening new tabs and general navigation should be faster than before. 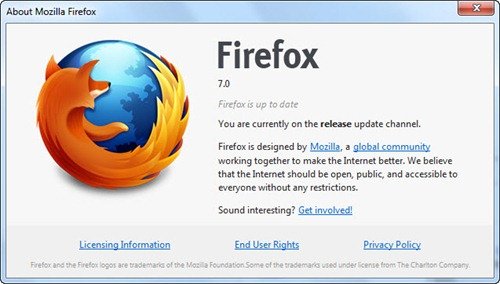 If you take your web browsing a little more seriously or you are a developer there are some noticeable changes ‘under the hood’, we are told that HTML5 games and animation should load faster thanks to hardware-accelerated Canvas speeds, also Firefox 7 supports W3C navigation timing spec API – this is a valuable tool for developers who want to ensure page load times are acceptable across different connection speeds. Finally we must mention Telemetry, this sounds complicated, but it is pretty simple – to cut a long story short it allows users to anonymously send browser data to Mozilla’s team to help with future development, don’t worry, it’s secure.

For those of you already running Firefox you will probably get a notification telling you that the update is available for install, if not open up Firefox, go to ‘Help’ and then ‘About Firefox’ – as long as you are running a pretty recent release Firefox should tell you that Firefox 7 is available, follow the on-screen instructions and soon you will be running Mozilla’s latest stable Firefox build.

As you can see Mozilla’s devs seem to believe that in terms of design Firefox is fine, however now they want to concentrate on refining their web browser’s performance and make it more appealing to web developers – we can’t help but think this is because of the strong competition which Google Chrome brings to the table.

Have you installed Firefox 7? If so, have you experienced any annoying issues since updating?