According to Jon Jordan over at pocketgamer.co.uk, the Moving Day game sees players taking on the role of Alfie, as he tries to run his home removal business. Players must tilt their iOS device right to speed the rollerskating character up, and tilt it left to slow him down.

However, players must also avoid cats, dogs, tripping hazards and street obstacles, while picking up items that the driver has dropped out of the removal van. Some of the obstacles will slow players down, while others will just trip them up and force them to restack all their boxes. 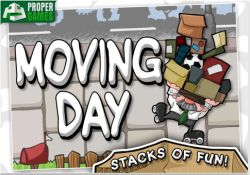 Players can of course score more points, by completing the level as fast as they can and collecting as many items as they can. The added Game Center and OpenFeint support enables players to share all their high scores and achievements with their friends.

The Moving Day game features a total of 24 levels, with three different street themes to play through including easy, medium and hard. As noted at itunes.apple.com, the app is compatible with the iPhone, iPod Touch and iPad, but does require the device to be running iOS 3.0 or later.

Do you enjoy playing games on your iOS device? If so, do you think you’ll download the Moving Day game?