If we can say one thing about this year’s Mobile World Congress, it’s the fact that manufacturers have made it increasingly difficult for consumers to decide on which tablet device is best for them. It’s definitely not about the iPad anymore.

After CES 2011, all the talk was about the Motorola Xoom, and how it would be the first tablet to bring Android 3.0 Honeycomb to the table, but MWC 2011 has changed everything. It now seems like the Xoom on Verizon could be a expensive mistake. 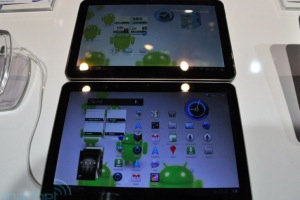 Why do we say this? Largely because Samsung has just unveiled their successor to the Samsung Galaxy Tab, and it packs some serious hardware capabilities. Like the Motorola Xoom, it will come with a 1Ghz dual-core processor and Android 3.0 Honeycomb as it’s main features. Then you’ll also get 1080p recording and playback capabilities, and a reasonable quality 2MP front-facing camera along with the 8 megapixel sensor on the back.

We’re putting our support behind the Galaxy Tab 10.1 as it seems like the better package compared to the Motorola Xoom. You may disagree with us on that one, but don’t forget there’s also the LG G-Slate tablet, which is yet another dual-core Tegra 2, Honeycomb combo to consider. Engadget has compiled a useful image gallery letting you see how all three tablets compare, side by side with one another.