Although we are still none the wiser as to the exact UK price of the Motorola Xoom tablet, we do have a few more details as to which UK retailers will be selling the much awaited device and an update on when we can actually expect it to arrive.

According to a recent article by Miles J Thomas over at 3g.co.uk, Motorola has just announced that the Xoom tablet — which will run on Android 3.0 (Honeycomb) OS — will be going on sale this April, and will be available from Carphone Warehouse, Currys and PC World.

The Carphone Warehouse will be selling both the 3G and Wi-Fi versions of the Motorola Xoom, while PC World and Currys will only stock the Wi-Fi version. The Xoom has some pretty impressive specs, including a 1GHz dual core processor and a 10.1-inch HD display with a 1280 x 800 resolution. 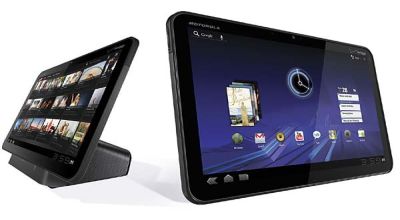 Darren Allan over on the techwatch.co.uk website has put the 3G version of the Motorola Xoom tablet at around the £600 to £700 mark. As he noted, online retailer Handtec recently posted a price of £720, but that was soon removed and replaced by TBC instead.

How much do you think the Motorola Xoom tablet will sell for in the UK? Are you interested in purchasing one?