Today is a huge day in Motorola and Verizon’s calendars, as it’s officially the launch date for the Motorola Xoom tablet, which is now available to buy starting from $599. But is the device worth it’s premium price tag or not?

We’re guessing you’re going to need a second opinion on whether to pick up the first tablet device to run Google’s latest Android 3.0 Honeycomb operating system. That’s why we have a review to show you, courtesy of Engadget.

The site has just put the finishing touches on their review, and we can tell you that they have given the device a 7/10. They have said that the plus points of the Xoom are it’s super fast UI, and there’s also a mention for the battery life, since the Xoom will be able to churn out a very impressive 8 and a half hours of life during constant multimedia use.

You won’t need us to remind you about the powerhouse hardware specs, as we’re sure you already know them, but you will want to know if Engadget had any notable problems with the device. The simple answer is no, as the only concerns were about a lack of software and ‘buggy OS’, two factors which will be fixed after the Motorola Xoom’s honeymoon period is over. 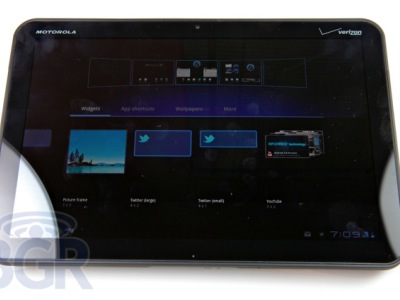 They have also included a great video, letting you see what the Xoom looks like up close and personal. There are five homescreens to scroll through, with each one offering different features such as the music app and YouTube access, both of which are packaged with the Xoom’s super smooth animations which look great on the display screen.

The interesting thing to note here, is that Engadget has claimed that in some areas, the Motorola Xoom actually ‘outclasses the iPad’. We’re sure a lot of you are going to want to comment on that particular aspect.

If you’re not satisfied with Engadget’s verdict on the Xoom, we’ve also provided a link to BGR’s Xoom review here. They have called it the best Android tablet on the market now. Do you disagree with them?

Update: We’ve just added an 11 minute video review by Gear Live on the Xoom as well, you can watch it below.