We are seeing a lot of tablet news over the last few months, as various companies bring out devices to take on the Apple iPad. One tablet that has got many people excited is the Motorola Xoom. Now we may have some more idea of the price courtesy of a Best Buy advert.

Engadget are showing an advert which is allegedly from Best Buy, which shows the Xoom is coming on February 24th, and priced at $799.99. It was thought before that the Motorola Xoom would indeed be priced between $700 and $800. The advert in question also shows some data tariffs which begin at $20 per month for 1GB of data, or if you need more it goes up to $80 for 10GB.

PCWorld has recently managed to get some hands-on time with the Xoom, and was impressed with build quality, but did find it was quite heavy. The screen displayed images beautifully, and was found to be really responsive. 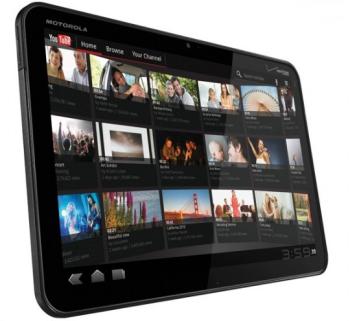 One thing that did concern was the Honeycomb camera application, with the on-screen button and navigation feeling awkward. But after only a small time with the Xoom it wetted the appetite to spend more time with it.

Is $800 too expensive for you to consider the Motorola Xoom?