We recently told you about a Best Buy advert showing the Motorola Xoom, with a price and a February 24th release date. Now we have news that the release date could be accurate.

Wirelessgoodness are reporting that it looks like the Motorola Xoom has managed to get FCC approval, which should mean the release will be very soon. The device has the FCC ID of IHDP56LU1, and is described by Motorola as a hand held device. The SAR reports show a large tablet shaped device, with test notes saying the devices battery is non-removable.

Other items the device got approval for was Bluetooth, and 802.11 a/b/g/n Wi-Fi. Some people believed that the IHDP56LU1 was indeed the Motorola Droid Bionic, but it is thought that Bionic’s battery can be removed unlike that of the IHDP56LU1. Demo units of the Xoom at the CES 2011 did not have a removable battery. 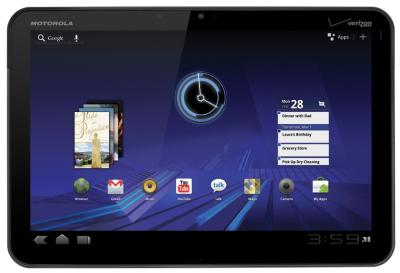 Engadget had originally thought the FCC files were of the Droid Bionic, but after studying the documentation agree with the team at Wirelessgoodness. They also said it fitted in better with the Q2 estimates for the Bionic release date.