Who would have thought that we would be talking about a Motorola Xoom Limited Edition in Gold a day before the Android 3.0 Honeycomb tablet a day before its release? We can tell you that the gold color tablet is not on sale and is only available for the Oscars over the weekend — well the nominees and the hosts to be precise.

So maybe once the weekend is over you might see Colin Firth walking around with a Gold Motorola Xoom? Engadget says that the special device will come presented in its own leather case as well; so it is right when those with all the money get all the special treatment? Although this does not seem fair to you or I, you have to remember that this is considered cheap advertising for companies.

We will just have to put up with the black version for now, but a silver model was seen doing the rounds during MWC 2011. Not as glamorous as the gold version, but maybe ColorWare will offer you this color choice at a later, or even from Stuart Hughes, who made a gold iPad, although this came at a cost of just over $210,000. 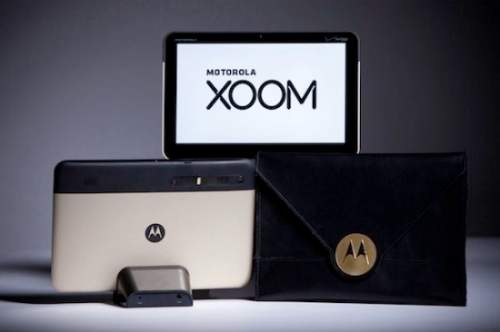 The standard color of the Motorola Xoom will be launched tomorrow, which could coincide with an announcement from Apple about the new MacBook Pro refresh and from Intel regarding Light Peak, which is now said to be called Thunderbolt — not sure what HTC will think about that.

Would you like to get your hands on a gold version of the Xoom?