We recently informed you about the official price for the Motorola Xoom tablet, which will be landing on Verizon soon. If you’re still a bit frustrated over the pricing, we have a great hands-on video for you to watch, on a more positive note.

The hands-on video has come to us courtesy of BGR, who managed to spend some quality time with the device at Mobile World Congress 2011. If you have been a little sidetracked with all the other tablets that have been announced at MWC so far, this video is a nice reminder of what the Xoom offers, even if the $799 price is a major turn-off.

Here’s a quick rundown of specs just to refresh your memory. The Xoom will come with a 10.1 inch display with a resolution of 1280Ã—800 pixels, a 1Ghz dual-core Tegra 2 processor, Android 3.0 Honeycomb and 1080p video playback to name a few key specs. Other features include a 5 megapixel camera with 2mp front camera, 1GB of RAM and 32GB of flash memory.

You may think that these specs are similar to other tablets that have been announced, but the one key factor which will probably separate the Xoom from any other tablet is build quality. The Xoom features a aluminium casing on the back, whereas other tablet manufacturers have opted for a plastic shell. 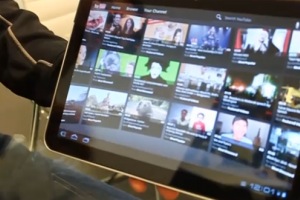 The result is a product which gives the user a much more solid and premium feel to the device you’re holding, which is why Motorola will justify their $800 price tag for it. Check out the video for yourself below and let us know your opinions on the Xoom – will you be getting one at this price or is it simply too high at the moment?

If you need a second opinion, we’ve also found another great hands-on video by UnwiredView for you to watch as well.