A few days ago we highlighted more evidence which suggested that the Motorola Xoom 2 was on its way, now we have a scan of what looks like a Carphone Warehouse Christmas flyer which seems to give away some details regarding this tablet’s price, release date and even some tech spec information.

We have embedded the leaked image at the bottom of this post, it suggests that the Carphone Warehouse will be selling the 16GB WiFi-only Xoom 2 for â‚¬399.90 – no release date is mentioned, but seeing as how the leaflet is decorated with snow flakes and gifts it is safe to say that it will arrive before December 25, 2011.

Sadly like a lot of leaks the image isn’t too clear, however we can clearly see that it looks like it will run Android 3.2 out of the box, also it will boast an 8.2-inch display and WiFi tethering capabilities. Sadly we can’t make out any of the other specs, but we expect it to trump the original Xoom’s 1GHz NVIDIA Tegra 2 dual-core processor etc.

As you have probably spotted there is no mention of Android 4.0 Ice Cream Sandwich, we think that it will be a massive disappointment if this tablet arrives without the latest flavor of Android which was showcased last month, what do you think?

According to Engadget the â‚¬399.90 price tag equates to $545, however it has to be said that a U.S. price may vary quite massively. We can only speculate for the moment, but we think that a price nearer to $450 – $500 would be much more suitable, that said it all depends on the specs and features it offers.

As and when we hear more information about this tablet we will keep you posted, for now let us know how you would like the Xoom 2 to build on the original’s success – let us know in the comments section below. 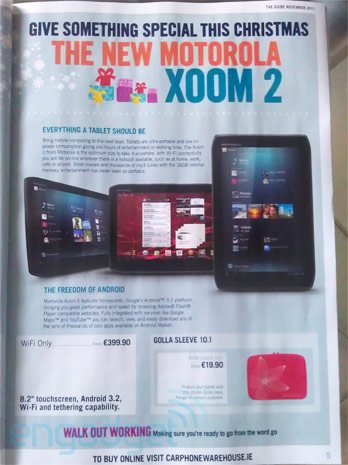