Following on from our initial report which confirmed that Google’s next version of Android will defnitely be available next year, we now have an update on a new tablet from Motorola which is on the way – thought to be the previously rumored Motorola Stingray tablet.

If you didn’t catch any of the All Things Digital event live, you would have missed Google’s Andy Rubin giving a very brief teaser of an unnamed Motorola tablet which will be running OS Honeycomb next year.

While Google were not prepared to give out many spec details on the Motorola tablet, Engadget has already named a few and if you put 2+2 together, it does look seem likely that this device well be the Motorola Stingray, planned for a release on Verizon next year. 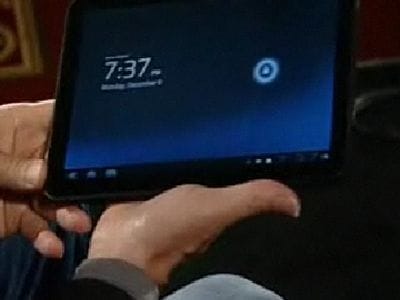 These details match up with a report we wrote back in October, which said that the Motorola Stingray would be a 10-inch Android Honeycomb Tablet, which would come equipped with a Nvidia Tegra 2 processor, 16GB of internal memory and also access to Verizon’s 4G LTE network speeds.

Hopefully we’ll be able to bring you more details on the Motorola tablet unveiled this week. Do you think that it is the rumored Stingray or a completely new device?