Recently a photo showed up on NewsDen which has caused a little confusion regarding Motorola‘s upcoming smartphone releases, this is because it appeared to show the Motorola Droid 3 aka Motorola Solana, but the retailer who leaked the photo called it the Motorola Targa aka the Droid Bionic.

Hopefully the retailer simply got mixed up and called the new device the wrong codename, if not the Motorola Droid Bionic’s form-factor change and further enhancements were a bit more drastic than we first thought.

We think that the retailer got things wrong and the device we are seeing is in fact the Motorola Droid 3 (codenamed Solana), the photo appears to show a smartphone with a 4-inch touchscreen display, a front-facing camera and a smaller bezel below the Android buttons than the Droid 2.

The photo in question can be seen below, it shows the original Motorola Droid on the left, the Motorola Droid 2 in the middle and the Droid 3 on the right, the massive display almost make this look like a miniature Xoom tablet, which I guess in some ways it is.

Check out the photo for yourself, do you like the look of this upcoming smartphone? 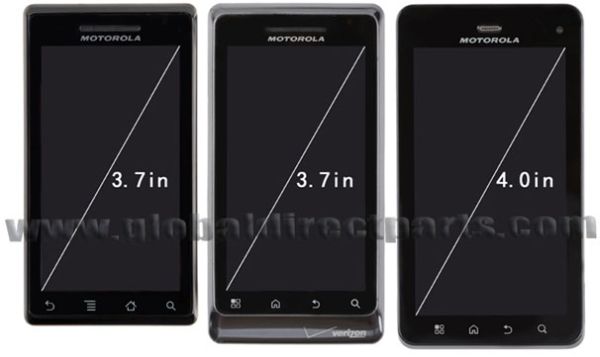