We have yet more unseen pictures of the upcoming Motorola Droid Xtreme handset to share with you now. This time we get a first look at the back casing of the device and in-turn, a confirmation of a few specs.

As reported from BGR, the pictures once again come to us courtesy of Droid-Life who have obviously managed to obtain the device before anyone else and before its expected launch on Verizon this Summer.

As for the pictures, there are two new images – the first gives us another good look at the front screen for the device, but the second shows us the back panel for the first time. If you zoom into the picture, you’ll be able to see that it features an 8 megapixel camera with HD video recording, while dual-LED flash has also been confirmed too.

You can check out the pictures below. Don’t forget the Droid Xtreme is meant to be the final name after the ‘Shadow’. Are you pumped up for this handset or not? 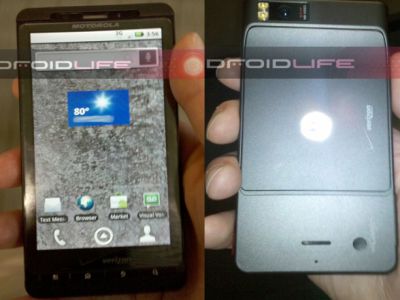