Earlier on we gave you some leaked official press shots of the upcoming Motorola Droid Incredible 2, and now we have some fresh pictures of another handset which a lot of you are likely to be interested in – the Motorola Droid X2 on Verizon.

The pictures look to be official, and they have been provided by the guys over at Android Central. One such picture below confirms that the Droid X2 will be almost identical in appearance to the original and hugely popular Droid X, but the one thing that everyone wants to know is what specs it will possess. 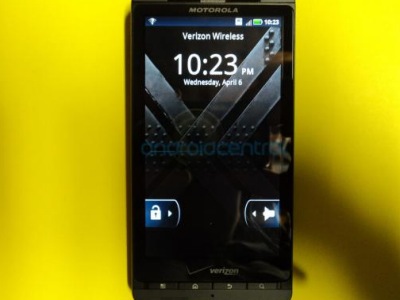 Sadly, Android Central do not offer any leaked specs, but the pictures they show do confirm that this handset is running on Android 2.2 Froyo – hopefully this gets upgraded to Gingerbread before launch though. However, an additional report they wrote back in February suggests that this may be equipped with a 1Ghz Tegra 2 processor, but it won’t have support for 4G LTE on Verizon, 3G only – what do you think about that possibility?

The X2 will still have the physical buttons on the bottom of the device, while further pictures confirm the return of the 8 megapixel rear camera too, as well as HDMI and Micro USB ports. If you ask us though, this needs to have 4G LTE support to really sell well, especially if Verizon get hold of the iPhone 5 which is very likely to happen.

Are you interested in the Droid X2 or not?