We’re sorry if the title is slightly misleading but we couldn’t read this, and not share it with you guys. It looks as if a Motorola Droid knock-off is currently making the rounds over in China, but it is nothing to get excited about.

Sometimes, Chinese knock-offs can produce some high-quality devices, in some cases even better than it’s official counterpart, but with this Motorola Droid ripoff – this definitely isn’t the case.

As Phandroid reports, it is available to buy now from Chinese website M8Cool, but rather than having Android as it’s default operating system, it just runs a basic version of Windows Mobile 6.5.

Other specs include a a 3.2-megapixel camera, 533MHz processor, GPS, WiFi and 256MB of RAM – so nothing special as we said. The supplied picture of the device even shows a Motorola logo – they certainly aren’t shy over in China are they?

Unlike the Chinese iPad clone, this Droid knock-off isn’t anything special. 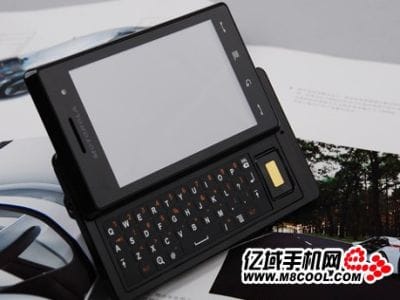