Motorola has just made the Droid Pro handset official, and you may be in for a huge surprise if you were expecting it to be the Motorola Droid 2 World Edition – we can tell you that it’s completely different.

As reported from BGR, the Motorola Droid Pro is a 3.1-inch candybar type device, which will be equipped with Android 2.2 Froyo and Blur UI. It does have that global feature that we knew about, as the Droid Pro will be usable in more than 220 countries according to the press release.

Other specs include a 5 megapixel camera with auto-focus, a 1GHz processor and dual-mode GSM/CDMA support. No word on pricing yet, but Motrorola has said that the Droid Pro will be available on Verizon during the first week of November.

You can view the press release over at BGR, as well as some official product photos. What are your thoughts on the somewhat surprising Droid Pro? Do you like it or not? 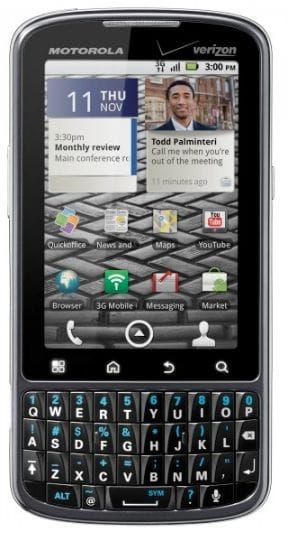