We recently told you how Amazon may have spilled the pricing details for the Motorola Atrix, but now it looks like they are at it once again, as a listing for the upcoming Motorola Droid Bionic has also appeared online at their website.

As reported from Droid-Life, something definitely is going down at Amazon HQ, as they either have a serial leaker who is revealing legit information, or someone is just posting misinformed details about Motorola’s upcoming handsets.

With this in mind, we can tell you that Amazon has priced the Motorola Droid Bionic at $150, the exact same price that we saw the $150 Amazon listing for the Motorola Atrix, before it was quickly removed by the online retailer. Could Amazon be teasing future promotions in which they’l be offering 4G handsets for just $150 on contract? 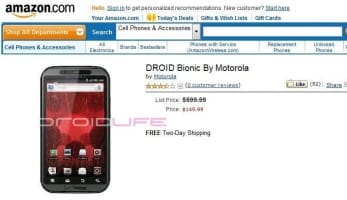 Considering that official pricing details for both handsets are yet to be revealed, perhaps we shouldn’t jump to any conclusions, but two Amazon leaks in the space of a few days definitely isn’t a coincidence we feel. Hopefully we’ll be able to get to the bottom of these leaks and find out if there is any truth to them.

If the Droid Bionic does end up being $149 on contract, then you have to say that it’s a pretty amazing deal right there. But then you also have to consider the other powerhouse phones on the way to Verizon, such as the iPhone and the HTC Thunderbolt.