The best 4G LTE phone on Verizon’s network is currently the Droid Charge from Samsung, see our review, but this is expected to change when the Motorola Droid Bionic is released. Today we’ve come across some benchmark results for the new dual-core Bionic, which Droid Life found by way of Nenamark.

These NenaMark1 results for DROID BIONIC are interesting, first off is the mention of Android 2.3.3 that would excite would-be-buyers who had enough of Froyo. With a summer release for the Bionic it was expected that Gingerbread would feature, so some relief there.

Results for this sort of test are easy to fake, and those that are skeptical will point out the incomplete score that leave you thinking why? And the Tegra 2 stated at CES has been replaced with PowerVR’s SGX 540 GPU in the benchmark. Now with an open mind, you would remember that Verizon’s LTE was having problems with NVIDIA’s mobile chip back in April, and the enhancements Motorola wanted to make to Bionic could include fixing that issue.

Seeing OMAP in this benchmark gets us thinking, but the strange results lead to many more questions, although we’re pretty sure that the change in GPU will ring true thanks to Motorola’s favoritism of the new dual-core TI OMAP 4440 and 4430 processors. 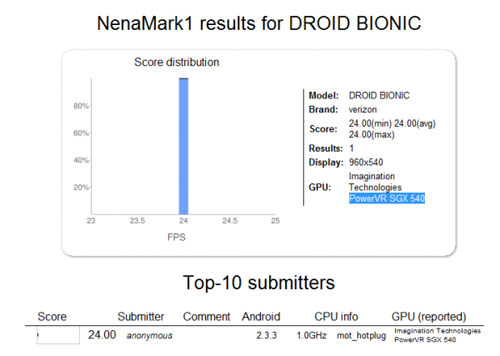 See a bigger picture of the results on nena.se.