We have some more details on the Motorola Droid 2 World Edition now, and possibly the most revealing details yet. We have the first specs for the device and also confirmation that it will come with more than one choice of color.

As reported from Droid-Life, the handset hasn’t actually been given an official name, but several names have already been associated with it – which include Droid 2 ‘World Edition’, Droid 2 ‘Global’ and even the Motorola Droid ‘Pro’.

Droid-Life has managed to obtain some initial specs for the device, one of which includes a 1.25Ghz OMAP3630 processor. If that spec is confirmed, then the Droid 2 World Edition is going to be a very fast handset indeed.

Other known specs include a 3.7-inch display screen, 5MP camera, same QWERTY keyboard as the original Droid 2, and also Android 2.2 Froyo as well.

Check out the image below, it shows the handset sporting a silver and white shell, which looks pretty cool I have to say. 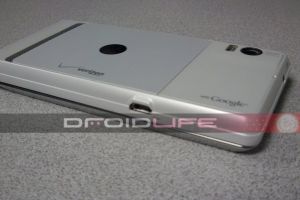