We have some surprising news to bring you now, as it has been revealed that Motorola are planning to end of the life of the recently released Motorola Droid 2 handset, in favor of a new Droid 2 World Edition with more features.

As reported from Phandroid, an image obtained by BGR clearly states the Motorola Droid 2 as ‘whilst stocks last’, so it seems likely that this move will indeed happen over the next few weeks. 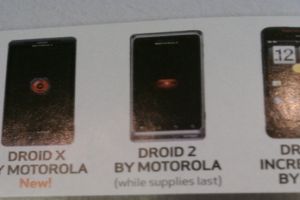 If the World Edition Droid 2 does come to Verizon, then hopefully it will bring a lot more added functionality to the handset, aside from it’s roaming capabilities. When we get an initial idea of specs for the device, we’ll be sure to let you know.

To all Droid 2 owners – Are you surprised with this move or not? Are you disappointed with the news, or does it not bother you?