This is turning out to be Motorola Droid 2 day. After our earlier report which revealed a possible release date and the first official pictures from Verizon, we have two more new pictures for you to feast your eyes on.

The pictures once again come to us courtesy of Engadget, who have obtained them via their trusty source – also responsible for the Droid 2 details earlier on.

One of the pictures gives us an exact look at the new QWERTY keyboard which will be featured on the Droid 2. While the Droid X looks similar in design, it lacks a physical keyboard, but Motorola has decided to retain the keyboard for the Droid successor.

Verizon customers are spoilt for choice at the moment. We wonder how many of you have already purchased the Droid X and will end up regretting their decision when the Droid 2 lands.

Take a look at the pictures and let us know your thoughts on this. 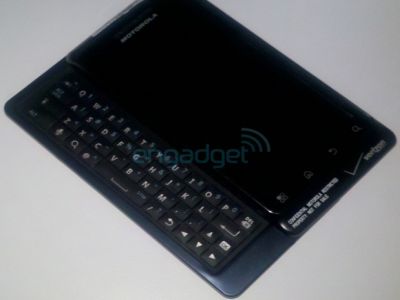