Two weeks ago the Motorola Droid 2 hit Verizon, expectations for this smartphone were high, however recent statistics from Chitika suggest that the release may not have been as successful as many would have thought.

According to Chitika it seems as if just 11669 smartphones have been seen in the wild by Chitika’s ad network, this equates to 0.00% of Android traffic.

To put this into some sort of context the original Droid accounts for around 29% of all Android traffic, whilst the Droid X accounts for roughly 4.19%, perhaps in a few weeks the Droid 2 will have some sort of impact, however things aren’t looking great.

You can see a chart showing the current Android traffic statistics embedded at the end of this post, I must say that I am slightly surprised to see the Nexus One so far down the list.

Do you think the Droid 2 is far less appealing than the Droid X? 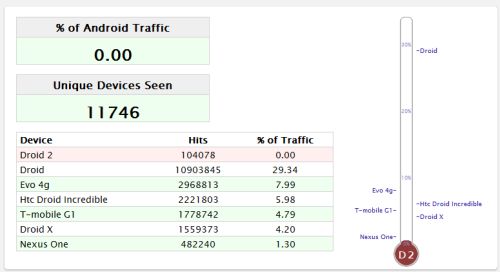