If you are a fan of Motorola products and you’re currently thinking about buying a new mobile phone, then I think we have some news that you might not want to miss out on. Motorola Mobility has just unveiled the new Motorola Defy+ smartphone, which as the company claim is both smarter and faster than its predecessor, the Motorola Defy.

As Brad Molen over on the engadget.com website recently noted, the Motorola Defy+ keeps the form factor, the IP67 certification and the Gorilla Glass, but adds better firmware and beefs up the internal components a little. Not only will the Defy+ come with a 1GHz single-core processor, it will also run on Android 2.3 Gingerbread with MotoBlur UI on top.

Although there is no word on specific release dates or carrier information yet, we do know that the Motorola Defy+ is expected to launch in Latin America, Asia and Europe sometime in the fall. Thanks to its dust proof, scratch resistant and water resistant design, the Motorola Defy+ handset offers great protection from whatever life throws your way.

It also comes pre-loaded with the CardioTrainer application, which transforms the handset into the ideal running mate. Users can even view and track their workout progress on the device’s 3.7-inch touch-screen display. The Motorola Defy+ handset’s 1700mAh battery is said to provide up to 7.1 hours of talk time, and up to 16 days of standby time.

The handset also features a Music Player, which enables users to access and share music from their favorite artists. They can even stream music from their desktop PCs at work or at home with Motorola Media Link. The Motorola Defy+ also comes with access to Google Apps (Google Maps, Google Talk and Browsing), as well as the Zinio e-magazine service.

Other features include a 5-megapixel camera with flash, autofocus and digital zoom, 2GB of internal memory and a microSD card slot that supports memory cards up to 32GB. The phone ships with a 2GB microSD card in the box. Do you like the sound of the Motorola Defy+? 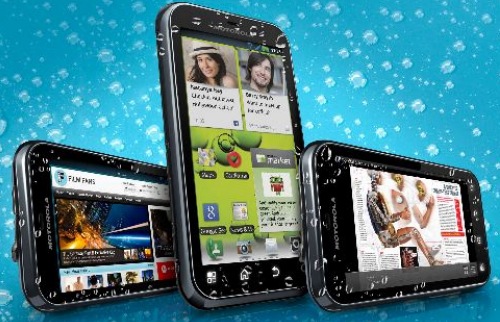